She was born on the first day of the year 1768, at the house of her mother’s father, Mr. Elers, at Black Bourton, some fourteen miles from Oxford, her father and mother having been married while the former was still an undergraduate, and under nineteen years of age. How far the failure of that marriage is to be ascribed to this circumstance is an open question. What is quite certain is that, for a man who afterwards rather distinguished himself as a husband, Mr. Edgeworth’s first début in that character cannot be called brilliant. Upon whichever pair of shoulders the blame ought to lie, by general consent the marriage was far from a success. Five children were born of it, a son Richard, in 1766, Maria herself, as stated, in 1767, two daughters, Anna and Emmeline, and an infant which died young. Shortly after the birth of her last child Mrs. Edgeworth herself died, at the house of her aunts, the Miss Blakes, in Great Russell Street. It has been noted [Page 4] with some surprise how casual, almost indifferent, the references to her own mother were apt to be, on the part of one, not only so affectionate, but so invariably dutiful as Maria Edgeworth. At the time of that mother’s death she was, it must be remembered, barely six years old, and she recalled little of the event beyond the fact of having been taken into the bedroom to receive the poor woman’s dying kiss. It followed that her first definite impressions as to the meaning of the word “mother” came to be associated, not with the rather depressed and sickly woman whom she had first called by that name, but with the young and remarkably pretty stepmother, whose advent upon the scene was only delayed about four months.

Castle Rackrent, a short novel by Maria Edgeworth published in 1800, is often regarded as the first true historical novel and the first true regional novel in English. It is also widely regarded as the first family saga, and the first novel to use the device of a narrator who is both unreliable and an observer of, rather than a player in, the actions he chronicles.
The story of the Rackrent family is narrated by their steward, Thady Quirk. The characters, the country life and the language used in the novel are unmistakably Irish. Shortly before its publication, an introduction, glossary and footnotes, written in the voice of an English narrator, were added to the original text to blunt the negative impact the Edgeworths feared the book might have on English enthusiasm for the Act of Union 1800.

In 1802 while in Paris, Edelcrantz did meet another inventor of a competing telegraph design–a meeting thatwould have important consequences for him. That person was Sir Richard LovellEdgeworth, the Irish inventor of the so-called Tellograph.Both Edelcrantz and Edgeworth became honorary members of the Societéd’Encouragementde l’Industrie Nationale, in both cases in recognition for their work on optical telegraphs.The acquaintance led to a number of social calls on Edgeworth and his family, who hadaccompanied him to Paris. Among the people Edelcrantz met there was Edgeworth’sdaughter, Maria.On 3 December 1802 Maria Edgeworth was in the middle of writing a long letter to heraunt, and confidante, Mrs. Ruxton. This is, in part, what she wrote:Here I am at the brink of the last page, and I have said nothing of the Apollo, theInvalides, or Les Sourds et Muets. What shall I do? I cannot speak of everything atonce, and when I speak to you so many things crowd upon my mind.–Here, my dear aunt, I was interrupted in a manner that will surprise you as much asit surprised me, by the coming in of Monsieur Edelcrantz, a Swedish gentleman,whom we have mentioned to you, of superior understanding and mild manners: hecame to offer me his hand and heart!!Edelcrantz had fallen in love. It could, by all means, be the beginning of something good.But, the letter continued:My heart, you may suppose, cannot return his attachment, for I have seen but verylittle of him, and have not had time to have formed any judgement, except that I thinknothing could tempt me to leave my own dear friends and my own country to live inSweden.My dearest aunt, I write to you the first moment, as next to my father and motherno person in the world feels so much interest in all that concerns me. I need not tellyou that my father — “Such in this moment as in all the past,” — is kindness itself;kindness far superior to what I deserve, but I am grateful for it.But, Maria could not be persuaded by Edelcrantz’s charm. On 8 December she wrote aboutthe proposal once more, this time in a letter to her cousin, Miss Sophy Ruxton.I take it for granted, my dear friend, that you have by this time seen a letter I wrote afew days ago to my aunt. To you, as to her, every thought of my mind is open. Ipersist in refusing to leave my country and my friends to live at the Court ofStockholm, and he tells me (of course) that there is nothing he would not sacrificefor me except his duty; he has been all his life in the service of the king of Sweden,has places under him, and is actually employed in collecting information for a largepolitical establishment. He thinks himself bound in honor to finish what he hasbegun. He says he should not fear the ridicule or blame that would be thrown uponhim by his countrymen for quitting his country at his age, but that he should despisehimself if he abandoned his duty for any passion. This is all very reasonable, butreasonable for him only, not for me; and I have never felt anything for him butesteem and gratitude.

Naturally, the number of crimes or ‘outrages’ increased during the Famine years – many, such as robberies of foodstuffs and even farm animals, directly related to the desperate situation. On 20 November 1847, The Longford Journal reported the stealing of a double barrel gun from the home of James Vincent, near Edgeworthstown, two weeks earlier. Its editor, Edward Dwyer, never missing an opportunity to moralise, made a revealing comment on the issue of law and order: he stated that an efficient magistracy and an effective police force were needed and ‘we would advise an active magistrate to be immediately appointed for this neighbourhood’. The nearest magistrate was Edward Eustace Hill in Longford.With the beginning of a new decade, the situation did improve: the potato crop recovered, but sadly, many of those who had depended on it were gone – either dead or emigrated. We must return to the census figures to gauge the impact of the calamity in the Edgeworthstown area. By 1851, the population of the parish was 2,351, which meant a drop of 42% on ten years earlier (the overall decline for the county was 29%, one of the highest in the country). The population of the town was 817, only a small decline on 1841, no doubt due to the fact that people had moved in from the surrounding area because of what they perceived as better prospects there.

This first of January,” she wrote in 1849, “was my eighty-second birthday, and I think I have as much enjoyment from books as ever I had in my life.” A notable new one, the first instalment of Macaulay’s History, reached her about this time, and she wrote a long letter on the subject to Dr. Holland, which appears to have been sent on to the historian, for we hear of his expressing pleasure in her enjoyment–”a small return for the forty years of enjoyment,” so he worded it, which he had had from her. Even the old childish love of small adventures–climbing to forbidden places, and the like–seems, incredible as it may appear, to have survived with her to the very end. In the last stage of all, when she was actually within a couple of weeks of her death, she has to confess to the crime of having scrambled up to the top of a ladder, this time for the purpose of winding the family clock. “I am heartily obliged and delighted by your being such a goose, and Richard such a gander,” she writes in a letter to her sister, Mrs. Butler, of May 1849, “as to be frightened out of your wits by my going up the ladder to take off the top of the clock. I summoned Cassidy, let me tell you, and informed him that I was to wind the clock, but that he was promoted to take off the top of it for me.–And then up I went, and I wound the clock, just as I had done before you were born !”This letter was written upon the seventh of the month, and exactly one fortnight later, upon the morning of the twenty-second of May 1849, Miss Edgeworth was seized by a sudden sensation of pain about the region of the heart, not apparently very severe. A few hours later she died, as she had always wished to do, in the arms of her faithful stepmother. 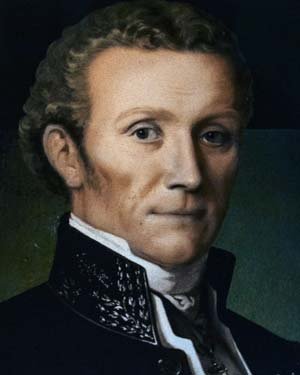 1754 – 1821: Count Abraham Niclas Edelcrantz was a Swedish diplomat who proposed to Maria in parish. After some consideration she turned him down.