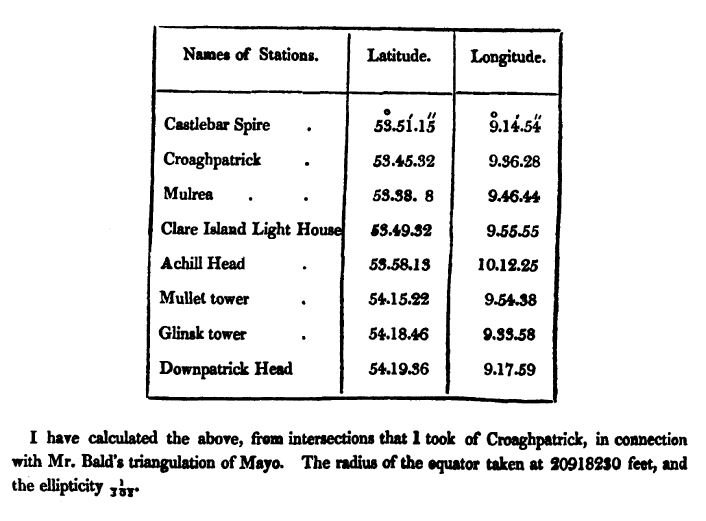 A letter written by William Edgeworth on the subject of mapping Roscommon – with some references to Longford and Edgeworthstown.

Early Journal Content on JSTOR, Free to Anyone in the World
This article is one of nearly 500,000 scholarly works digitized and made freely available to everyone in the world by JSTOR.
Known as the Early Journal Content, this set of works include research articles, news, letters, and other writings published in more than 200 of the oldest leading academic journals. The works date from the mid-­‐seventeenth to the early twentieth centuries.
We encourage people to read and share the Early Journal Content openly and to tell others that this resource exists. People may post this content online or redistribute in any way for non-­‐commercial purposes.
Read more about Early Journal Content at http://about.jstor.org/participate-­‐jstor/individuals/early-­‐ journal-­‐content.

Dear Sir,
At your request I send you an account of a few of the principal triangles upon of Roscommon was constructed. I have calculated the sides from a base measured on the road from Longford which the Map of the county to Edgeworthstown, an account of which was published in my father’s Report on the Bog District, No. 7, and, with a diagram of some of the Commissioners triangles, is to be found in the Second Report for improving Bogs in Ireland. On my map of the county of Longford I have published the principal triangles upon which it was founded ; and the latitude was determined from observations of the pole star, with an instrument of sixteen inches diameter, that
Major Taylor most kindly lent to me. The longitude of Edgeworthstown was determined from the Observatory of Dublin, by the valuable assistance of Dr. Brinkley who was so good as to make corresponding observations of white lights and explosions of gunpowder; four in one night agreed with the mean, within a second of time.
So that the longitude of the stations in the county of Longford may be considered as certain within a furlong I have connected the triangulation through Roscommon with some of the stations made use of by Mr. Bald in his excellent map of Mayo. Even with the slight data, that I can now give, the difference of latitude and longitude of the east and west coast of this island is known within a few seconds of time. The principal angles in Roscommon I took in the year 1814, with a six inch theodolite made by Troughton.
But I am now in possession of a repeating circle of eighteen inches diameter of his make ; and a repeating theodolite of Reichenback, which, from the trials that Major Colby and Captain Kater kindly encouraged me to make of this instrument, at some of the trigonometrical stations in England, in comparison with the celebrated theodolite of Ramsden, I think I could be as certain of an angle to two seconds, as formerly I was to twenty seconds. So that it would be well worth while to employ this repeating theodolite to correct, by a few well chosen triangles, Galway and Sligo with Dublin, and to determine exactly the distance on the meridian between Dublin and Armagh Observatories. A few more triangles would connect Armagh with the stations on the coast of Ireland, which have been intersected by Major Colby. lf I were to give a diagram of all the triangles that I determined in Roscommon, you would find a station nearly in every square mile, as my object was to secure the accuracy of the map. The manner in which 1 laid down the triangles on paper may be found useful to those few who are employed in similar labors. After having carefully drawn, mile squares of four inches asunder, and laid down a long base, I made use of a nine inch protractor of Troughton’s, with extending conical points. Over one of these 65 points I placed a little pin hole in thin brass, so that I could see the opposite point through it ; and, instead of marking the paper with the points, I intersected a little square cube with a fine perpendicular line marked on it, where the station to be determined was likely to come. I moved it back and forwards, till the protractor, when set to the division, showed where the line should be drawn, which I did without taking up the protractor. In this way I marked every station round, at once, from the angles in the field book. This may be called surveying on paper, as I made use of the protractor in laying down the angles, as I had done the theodolite in the field. And when the paper was kept of equal dryness in the large triangles, I could perceive an error of a minute. I here give you a table of the angles to twenty seconds, and the sides calculated in feet, with the latitudes and longitudes of a few of the stations.
I am, dear Sir,
Your’s sincerely,
WILLIAM EDGEWORTH.