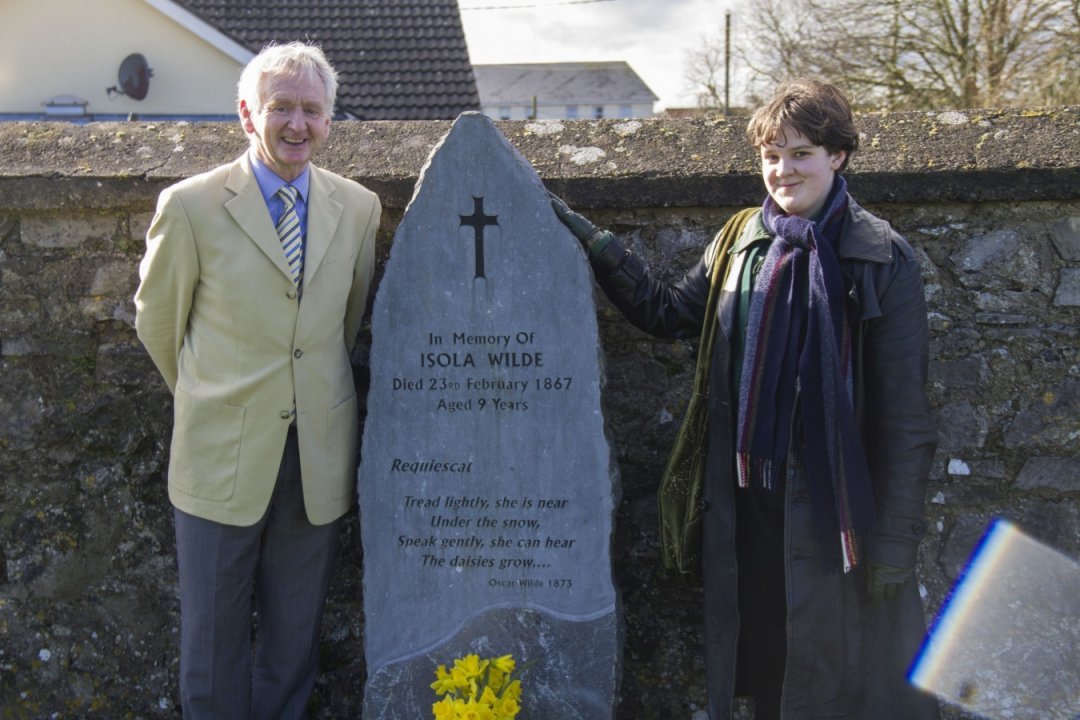 On the 26th February last we hosted a commemoration of the 150th anniversary of Isola Wilde’s death. The Oscar Wilde Society in the UK sent a representative to cover the event for their scoiety magazine ‘Intentions’. That article has now been published in Intentions and we are grateful to the Society and the author – Algernon Laugen-Kelly for permission to reproduce the article here

On 26th February, Edgeworthstown in County Longford hosted a commemoration of Isola Wilde, who died 150 years ago. The ceremony took place in St John’s Church, a grand old eighteenth century building containing many memorial plaques to members of the illustrious Edgeworth family. On a table at the back lay a book of births, marriages and deaths, open on the page where Isola’s passing was duly noted. By three o’clock a crowd had gathered inside the church after stopping in the blustery sunshine at Isola’s gravestone by the gate. The turnout was good. It says something for how well the event must have been announced, that when a local man spotted me standing in the middle of town at ten to three with a lost look on my face he guessed immediately what place I was seeking.
Matt Farrell, Chairman of the Edgeworth Society, was MC. He welcomed us proudly to his town, small in size but of some cultural significance. Indeed, Matt went so far as to say (with a smile) that during the Enlightenment it had been the centre of the universe! There is some justification for this considering all the literary figures Edgeworthstown can claim association with – as well as the Wildes, Wordsworth, Scott and Oliver Goldsmith also had connections with the place. This tradition continues: several excellent writers took part in Isola’s commemoration. The first of these was Eleanor Fitzsimons, author of Wilde’s Women, whom we enjoyed hearing read the part of her book which describes Isola’s short life. The ceremony was punctuated throughout by the violin of a most talented young musician, Nadine Smith. She played a lament of terrible beauty as Declan Neville gave a poignant reading of Requiescat. Following this, three marvellous poets, students from the Oscar Wilde Centre of Trinity College Dublin, read us verse they had written about Isola. First up was Elizabeth McIntosh, whose moving Children’s Rhyme for Isola has a
neat form and draws cleverly on faerie folklore. Then Sean McNulty read his beautiful Wilde Home, which added to the general melancholy by reminding us of Oscar’s death as well as Isola’s. Finally came Gisele Scanlon with Requiescat – The Little Princess – leaving us in tears or very near them with a brilliant, utterly pitiful rendering of what Speranza’s grief must have been. All three works are I think in dire need of publication and admiring wreaths. [The poems will be published in a future edition of The Wildean. Ed.]
Next to talk was Jarlath Killeen, who gave an illuminating analysis of Isola and Oscar’s relationship based on Requiescat. He contrasted the envelope containing Isola’s hair (not tarnished at all) with the poem, and discussed how death as perceived in Irish folk tradition may have influenced Oscar. After this Ed Smith read a blessing of remembrance, Matt Farrell gave a closing speech and Nadine played us out with a jig.

From the church we walked to the old rectory where Isola spent her last days. Those of us who preferred to sacrifice our shoes rather than go the long way around squelched through the winter-soaked field that separated us from the rectory. This building also dates back to the eighteenth century and is no longer inhabited but kept as a museum. It was touching to see that one of the upstairs bedrooms had been turned into a room for Isola, scattered with the clothes, books and toys that a young girl might possess in the nineteenth century. At the window however there stood a ghostly figure made of white paper on a wicker frame. I was told its presence was incidental as it was part of some exhibition commemorating the 1916 Easter Rising. However, its presence in Isola’s room seemed eerily appropriate.

Downstairs the place was lively, as is bound to happen when a large quantity of Wildeans are crammed together drinking tea. The atmosphere was added to by traditional Irish music played, and played very well, by a group of young musicians. (Even without all the literary connections this little town would appear to boast alarming amounts of talent.) The fine Georgian aesthetics may well have helped keep up the standard of the conversation, which carried us through time rather quickly.
When most of the crowd had gone, a small group including Jarlath, the three poets and myself braved the by now bitter wind to follow Matt Farrell on a walking tour around the town. We visited the beautiful old Edgeworthstown House, now a nursing home, and walked through its gardens. Matt was immensely knowledgeable about the town – he knew exactly where everything had once stood, which row of daffodils in a field marked which former road, and so on. By the time we got back it was getting dark and really bone-chillingly cold. But it had been a wonderful day. Much appreciation must go to those who put all the thought and work into organising such an event and hosting us so generously.