Sir Walter Scott and his home at Abbotsford
Sir Walter Scott (15 August 1771 – 21 September 1832) was a prolific Scottish historical novelist and poet popular throughout Europe during his time. Born in College Wynd in the Old Town of Edinburgh in 1771, the son of a solicitor the young Walter Scott survived a childhood bout of polio in 1773 that would leave him lame. At the age of 25 he began dabbling in writing, translating works from German. In 1814 he published his novel Waverley, Rob Roy in 1817 and in 1819 Ivanhoe. He built a house near the site of the Battle of Melrose, called Abbotsford. In 1823 Edgeworth spent 2 weeks with Sir Walter Scott at Abbotsford, and in 1825 Scott visited her at Edgeworthstown, which had become a shrine at which all visitors to Ireland paid homage. Scott described his meeting with Maria as follows: he found her “full of fun and spirit; a little slight figure, very active, very good-humoured, and full of enthusiasm.”. 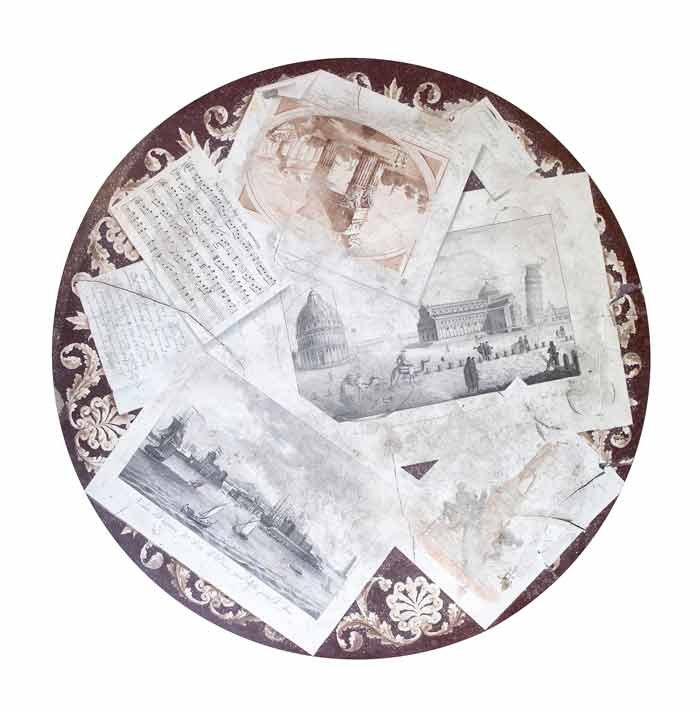 One of Scott’s friends wrote about the visit. “August 1823,” he writes, “was one of the happiest in Scott’s life. Never did I see a brighter day at Abbotsford than that on which Miss Edgeworth arrived there. Never can I forget her look and accent when she was received by him at his archway, and exclaimed: ‘Everything about you is exactly what one ought to have had wit enough to dream !’ . . . Day after day, as long as she could remain, her host had always some new plan of gaiety. One day there was fishing on the Cauldshields Loch, and a dinner on the heathy bank. Another, the whole party feasted by Thomas the Rhymer’s waterfall in the glen; and the stone on which ‘Maria’ sat that day was ever afterwards called ‘Edgeworth’s Stone.’ . . . Thus a fortnight was passed–and then the vision closed. Miss Edgeworth never saw Abbotsford again.”

Below: Table presented to Maria Edgeworth by Sir Walter.