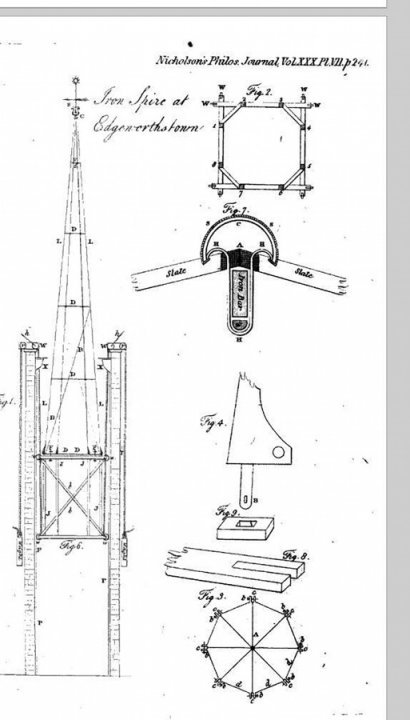 Richard Lovell Edgeworth erected a pre-fabricated spire on the Church of St John in 1811 – it lasted until the early twentieth century when it had to be removed for safety reasons. He worte a description of how he the Spire was constructed and raised into place in a letter written to Nicholson’s Journal of Natural Philosphy in 1811. Below is a reproduction of the letter as well as the plans and a photo of the spire taken in 1890

It has occurred to me since the spire was finished, that, instead of a temporary wooden pedestal, an iron permanent pedestal might be substituted, which might be formed by a continuation of the legs of the spire. At the base of this pedestal, if it were thought necessary, a brick arch might be turned on the lowest diaphragm. This would add weight, and consequently solidity to the mass. This pedestal must be connected with the tower by holdfasts and wedges.
I mention this, not because I find any inconvenience in what I have executed, but to communicate to the public all that has occurred to me on this subject.

*Note: The slates were first cut with sand, and such saws as are used for cutting marble. Though this is the method followed at Penrhyn, I found commonsaws of a smaller size, such as are usually sold for half a crown, far more expeditious.
In cutting the grooves, that receive the copper capping, I employed thin saws with a wooden back, which was held in the hand of the workmen. To make these saws, I cut the blade of small saws into four parts with common tinkers’ sheers. Air holes in form of à quatre seuille were made near the top of the spire, to permit the circulation of air, and they serve also to facilitate the application of a moveable scaffold, whenever the spire requires new painting.